During a long day of scanning glass plate negatives in the Digital Image lab a fleeting image with an intriguing caption caught my eye during a quality control inspection session. As hundreds of images depicting various scenes of the Brooklyn Navy Yard whizzed by on a computer monitor I noticed a scan with the caption: Laying the Keel of U.S.S Battleship No. 39 Arrival of Asst. Scty [sic] F.D. Roosevelt, & Others. (RG 181, Photographs of the Construction and Repair of Buildings, Facilities, and Vessels at the New York Navy Yard, compiled 1903 – 1920 National Archives Identifier 6038115) I asked my colleague P.T. Corrigan to slow down the inspection process and back up to try and find the image that had just passed by. 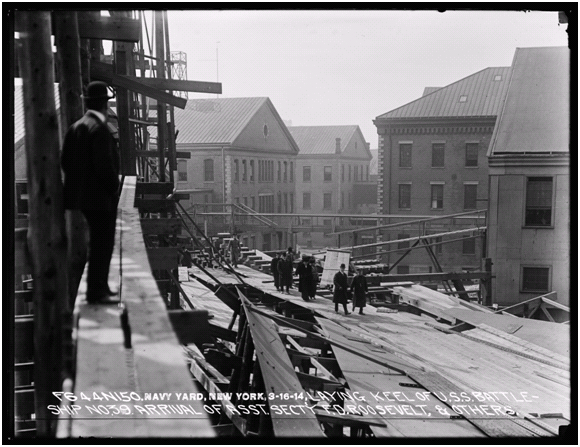 The image depicted a man standing on a scaffold looking down at group of dignitaries in the distance walking toward the camera. Striding confidently in the front of the group was a smiling figure wearing a stylish derby hat with his head cocked staring straight at the camera. Behind him was a gaggle of VIPs in great coats, hand warmers, and top hats. We weren’t sure if the person in the image was Franklin Delano Roosevelt, but P.T. as a military history buff was quick to point out that everyone knew (except me apparently-I am a photographer with a degree in Medieval History) that “Battleship No. 39” was the Battleship Arizona sunk during the Japanese attack on Pearl Harbor during World War II.

When I enlarged the high resolution scan to 100% I could make out a figure resembling FDR, but the figure in the photograph was not confined to a wheel chair; instead he was walking and smiling. I knew that Roosevelt was stricken by polio later in life, but I was unsure when it had happened.

I raced to my computer and searched for “FDR” and the “Brooklyn Navy Yard” and found out that FDR had indeed served as Assistant Secretary of the Navy. He had visited the Navy Yard during the keel laying ceremony which is depicted in the image that we scanned.i  I went back and took a closer look at a detailed view of the scanned negative and confirmed that the figure walking across the Navy Yard dry-dock was FDR. I was humbled to think that I was looking at an image of FDR waking upright before he had contracted polio.

Thanks to the emphasis placed on digitization and new social media tools that NARA is deploying, it is likely an experienced historian or an astute citizen archivist would eventually have discovered the image when it becomes available online. However, discoveries like this happen all the time at NARA when one is engaged with the archival records and is attentive during the digitization lifecycle. On the other hand, happy discoveries are what make working with historical records interesting. The story of the scanning project is almost as interesting as the discovery of the image of FDR, and is an example of how “One NARA” creates value to the work we do and the treasures in our collections.

The saga started several years ago when crates of 4,000 4×5” to 11x 14” glass plate negatives were transferred from the New York Archives to the photographic lab for preservation duplicating. Before the copy work could start, photo lab staff and student workers overseen by conservation staff began the process of re-housing and re-boxing the collection. Once the re-housing process was complete, photo lab staff began duplicating the negatives onto analogue photographic film. At the same time the film duplication was starting up, the imaging labs were installing high resolution digital cameras intended to replace the analogue film process with a new digital workflow.

The traditional photographic negative duplication technique involved a two step process to create a positive image film intermediate known as an inter-positive, and then to make a copy negative from the inter-positive. This was the accepted analogue archival reformatting approach to copy negative collections because the photographic process required a negative image to be created of a negative original. At the same time the film duplication of the glass negatives were being made, I was tasked with implementing a new digital imaging system capable of creating a 133mega-pixel 800 megabyte digital file. Since we needed to put new equipment into production, it was decided to transition the duplication of the Navy Yard glass plate negatives into a digitization project.

The Digital Lab scanned over 4,000 glass plate negatives and created three types of digital files for preservation and access.ii First the lab created a high resolution digital preservation master file, then a high resolution reproduction master suitable for exhibition purposes is derived from the preservation master, and finally a lower resolution access version is created that is suitable for online access. One of the major advantages of the digitization process is that by scanning directly from the camera original, more detail is captured than the two generation analogue process. A greater tonal range and a more accurate reproduction of the historic original are possible with digital technology.

From my vantage point at the “hub” of the digitization process, I interacted with a wide spectrum of NARA staff that played essential roles in the much larger archival process. The project was first launched as a photographic conservation re-housing project led by Pam Kirschner. The vital labor for that phase was conducted by Imaging Lab staff and student workers. The the imaging lab staff worked to scan, process, inspect, and create the digital preservation and access files. To facilitate the digitization process, I created a production tracking database that served as an item level finding aid to the negative collection. When the digitization process was completed, this database served as the basis for further descriptive work.

Next, the scans and production database were transferred to archivists Dawn Powers and Jennifer Pollock. Dawn and Jennifer worked with the New York office to have the series description entered into the Archival Research Catalog (ARC) and to transfer the files onto hard drives from the digital lab. They also worked out a project plan with Suzanne Isaacs from ARC Staff to have these images and descriptions put into ARC. When they realized that most of the images had captions on them, they decided to explore with the Volunteer Office if there were any volunteers who might be available to enter the descriptive information from the images onto spreadsheets.

After meeting with the volunteer program coordinator Judy Luis-Watson, Dawn and Jennifer completed a Volunteer Project Worksheet that outlined the tasks to be completed. Judy was able to assemble a team of seven volunteers who viewed the digital copies of the images and annotated each image in the data base with the title, production date, agency assigned ID, file name, and other scope and content information identified during the annotation process. Harry Kidd, the project’s lead volunteer, and a photographer’s mate while in the US Navy, reviewed the work and conducted research to answer the team’s questions and provide additional information on the sometimes cryptic captions that accompanied the original images. As the volunteers completed each segment of the project, it was reviewed by Harry. Each section was then also reviewed by Jennifer, and then edited by Suzanne before going through ARC review to be placed online by Gary Stern.

At this point, approximately half of the images are on ARC and hopefully the rest will be soon. Finally, when the images are online in OPA they will be made available to citizen archivists to tag and transcribe on social media outlets such as Flickr and HistoryPin. By placing these images on Social Media outlets, an even greater range of interested citizen archivists will be able to engage with NARA’s records than ever before. It would not be possible without the efforts of the various staff that constitute “One NARA”.

10 thoughts on “Finding FDR in the Brooklyn Navy Yard: An example of “One NARA” at work.”