We’ve loved reading your suggestions and comments about sharing NARA’s holdings on Flickr, and it’s been interesting to see which images people are marking as favorites. All of this got us wondering about which records NARA insiders are particularly fond of, so we asked a few of our experienced colleagues for their picks. This week’s contributor is: 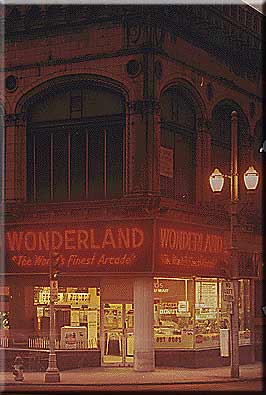 This photograph is one of my favorites because of the fact that the building pictured in the photo is still standing.  It’s architecturally interesting and has a unique history of it’s own.

At the time of the photo and case it was used as an entertainment center with the Arcade and other games in it, including a pool parlor at some point, appealing to folks who came to downtown Kansas City for entertainment purposes.  The photo was taken as exhibit evidence in a case involving taxes collected on pinball machines.  This photograph is one of several that accompany the court case.

The building is known as the Bonfils Building and was built in 1925 on speculation by commercial developer Frederick Bonfils. Located in the heart of Kansas City at 12th and Grand, the two-story structure was designed in a Venetian Renaissance Revival style and has hosted various commercial tenants over the years.  Most recently the National Association of Intercollegiate Athletics has rehabilitated the structure as their national headquarters.  And in the late 1980s the building was listed on the National Register of Historic Places.

Frederick Bonfils, was a publisher who owned the Denver Post and Kansas City Post.  The latter was often associated with the Tom Pendergast political “machine” in Kansas City.   In addition to his publishing ventures, Bonfils also was an owner of the Sells Floto Circus, a traveling carnival and circus show that traversed the United States in the early 20th century.