Founded in 1936, the Society of American Archivists (SAA) celebrates its 75th anniversary this year.  During the week of August 22, almost 1,800 archives professionals from all over the globe gathered in Chicago, Illinois for SAA’s annual meeting and anniversary celebration.

I walked around Chicago’s Loop,  in awe of the city’s landmark skyscrapers – many built during the decade when SAA was forming — imagining the thousands of people working together to set in place each rail of steel, each brick, each sheet of glass.

Today’s blog features my introductory remarks to SAA session #701, “New Perspectives for the 1940 Census” providing a quick history of innovative technologies used for processing and accessing census data.  The session was similar to one that I chaired at the National Association of Government Archivists and Records Administrators (NAGARA) July meeting in Nashville, TN (see our previous blog post).

The U.S. Census Bureau conducted the first population count in 1790.  Census workers went door-to-door to gather numbers about people and their communities, for the purpose of apportioning members of the House of Representatives among the states. 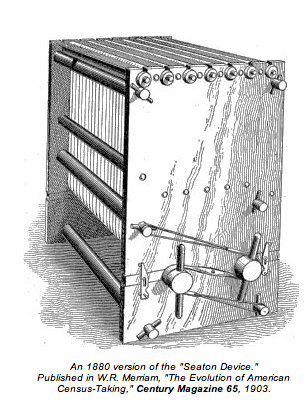 Almost one hundred years later,  the Seaton Device (left) was introduced and used to tabulate the 1870 census.  But the device was not advanced enough to keep up with the flood of data that was received from the 1880 census.

In 1890, a Census Bureau employee, Herman Hollerith improved on the Seaton Device, by inventing an even better counting machine that revolutionized the census tabulation process.

Some years later, Hollerith incorporated his business as the Tabulating Machine Company. In 1911 the company was consolidated into the Computing Tabulating Recording Corporation (CTR); and with Thomas J. Watson, Sr., at the helm, CTR was renamed IBM 13 years later. (1) The Hollerith machine was a precursor to the punch card machines that were used during the 1950s-60s.

If you have used census records in your research, you are probably familiar with the index tool called “Soundex,” a system developed by Remington Rand Company in the 1930s.

Soundex uses a set of rules and algorithms of numbers based on the way a surname sounds rather than the way it is spelled.  It was developed to locate a surname even though the name may have been recorded under various spellings.  For example the name SMITH or SMYTH shares the same Soundex Code S530 and are filed together.  Additional information about Soundex and its rules are on the NARA website.

What’s most fascinating to me about Soundex is that it was one of President Roosevelt’s Works Progress Administration (WPA) projects.  The Historical Records Survey (HRS) compiled indexes of historical records around the country, hiring hundreds of people, for example to create name indexes — using the Soundex system — for census records from 1890 to 1930. (2) However, the WPA Program lasted only eight years; if you attended either the NAGARA or the SAA sessions, you learned that there is no Soundex index for the 1940 Census.

During the 1950s, the Census Bureau and the National Bureau of Standards developed a computer system called FOSDIC, which stands for Film Optical Sensing Device for Input to Computers. Using census and survey questionnaires that had been photographed onto microfilm, FOSDIC  “read” the blackened dots on the response sheets, then transferred that data onto magnetic tape.  FOSDIC was an important innovation for its time, because it eliminated most discrepancies in processing the data records.  It was first used around 1960 and for many years later, well into the mid 1990s.

Before I came to NARA while I was in graduate school, I spent one year working at the Census Bureau.  I was part of a team that analyzed the Census 2000 operations, looking at security/privacy issues, and use of new technology for example, to understand challenges and possibilities for the 2010 Census.

Optical scanners were used to capture and process almost 150 million forms received.  My team observed scanning operations involving thousands of people hired to work 7 days a week at four processing warehouses around the country.  It was an incredible sight to see!

I close this blog with words shared by my third speaker, Dr. Kenton McHenry from the National Center of Supercomputing Applications (NCSA).  As his research team develops promising new tools for NARA to improve access to census records (read more in our July blog), Dr. McHenry emphasizes the importance of  “keeping people in the loop” by collaborating with volunteers, students, and other interested communities to fulfill their research.

Stranded in Chicago due to Hurricane Irene, I continued my walkabout around the Loop, surrounded by grand architecture and thoughts of the teams of people who built them, amazed at how these monuments stand proudly — much like how the Society of American Archivists has endured — over the last 75 years.

Our next write-up will focus on a fascinating dialogue held a few weeks ago, hosted by NARA’s Applied Research team with Dr. George Strawn, Director of the White House’s Networking and IT Research & Development (NITRD) Program – where Dr. Strawn also lays out a history of the use of computers and technology research by federal agency NITRD partners to advance knowledge and improve agency operations.

Stay tuned, and feel free to leave your comments below!

One thought on “Archives 360°: “Keeping Humans in the Loop” in Chicago”